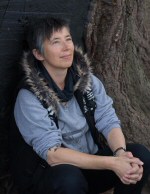 Manda Scott is a veterinary surgeon, novelist, podcaster, regenerative economist, smallholder, and in the past year, a conscious evolutionary. She believes that we are on the edge of the next evolutionary step and that it is one of consciousness, consciously chosen: that we are now the conscious creators of our own destiny, but that we can only make it if we work as an integral part of the wider web of the More than Human world. For the past year and a half, her life has been devoted to finding ways to bring the maximum number of people to a point where they can connect with the greater web in a way that is authentic, grounded, coherent, and, above all, constructive. She believed this was timely before the Corona Virus pandemic: now,she believes it is urgent. We are the people and the time is now.