Do Black Lives Matter in a predominantly white area like Shropshire? Rose Hudson-Wilkin answers that question with a strong "yes", not as an ideological battle or a guilt-trip, but as an invitation to a journey, and the prospect of a better future built on truth, trust, and reconciliation. 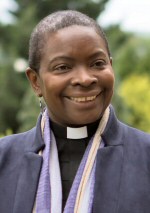 Rose Hudson-Wilkin is the Bishop of Dover and the Bishop in Canterbury, with oversight for the Canterbury Diocese.

Rose was born and raised in Jamaica. She was educated at Montego Bay High School for Girls and later at Birmingham University. She trained with the Church Army and was commissioned in 1982 as an Evangelist; she later trained for ordination at Queens Theological College on their part-time course, ordained deacon in 1991, priested in 1994 and served her title at St Matthewʼs Church, Willenhall Road in the Diocese of Lichfield.

For sixteen and a half years, Rose served as a priest in Hackney (Holy Trinity with St Philip, Dalston and All Saints, Haggerston). In 2007 she was appointed as a Chaplain to Her Majesty the Queen and in 2010, she became the 79th Chaplain to the Speaker of the House of Commons, the first woman appointed to that position. In November 2014, she took on the additional responsibility as Priest in Charge of city church, St Mary-at-Hill near Monument.

Rose has also served as a Selection Secretary for the Church of England, helping to select men and women seeking to test their vocation to the ministry.

Rose does numerous preaching and speaking engagements nationally, and occasionally overseas. She was a member of the Broadcasting Standards Commission and has wide experience of media engagement, including some religious broadcasting.

Rose is married to Kenneth, a prison Chaplain, and they have three adult children.