A life beyond alcohol

When you are addicted to alcohol, it is impossible to conceive of a life without it. Twenty years ago, Robert could not have conceived that he could ever be living the kind of life he now lives.

Robert will tell his story; a shaky start, a downward spiral, recovery, new opportunities, new beginnings. It was not the life he planned or expected. But along the way, Robert has learned more about himself, and salutary lessons about alcohol dependency and recovery. 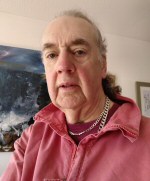 Robert spent his entire career with the Metropolitan Police Force. After starting as a police cadet, he patrolled the streets around the Albert Hall, then transferred to the armed division working at Heathrow. On retiring from active service, Robert worked arranging for the maintenance of the fabric of police buildings in London. But alcohol abuse eventually caught up with him.

Robert has now celebrated his 'twelfth birthday' with Alcoholics Anonymous (twelve years since his last alcoholic drink) and divides his time between Orkney, Manchester, and visiting friends in his camper van.