A conversation with Samaritans

Here for anyone who needs someone

Samaritans is one of the most widely recognised names among charities, and a view often voiced is that it is there almost as a last resort for people at the end of their tether. This session is designed to go behind the “brand name” to inform people by encouraging them to identify and explore who Samaritans are, what they do, why they do it and how. The implications of all this will be considered locally, regionally and nationally. Richard and his colleagues from the Samaritans hope that this will strengthen people’s knowledge and understanding of what Samaritans services offer, particularly at night, weekends, and at times of crisis.

Richard will talk about how the Samaritans provide support to people at times of crisis, and to their families, friends, colleagues, teammates and organisations, both directly and through working in partnership.

This session will be more conversational than purely “chalk and talk” so that people can respond to what is being said and listen to others. 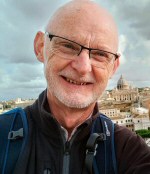 Richard has been a Samaritans Listening Volunteer since 2013, based at the Shrewsbury branch. As well as his listening shifts with the Samaritans, Richard has served as Branch Director, as a Deputy Director and is currently Vice Director. He has led on the branch’s outreach and partnership work with communities, charities and services across Shropshire.

Richard is Lead Volunteer for the national Samaritans Missing People partnership. He is also a trained Postvention Advisor with Samaritans Step by Step service supporting schools, colleges, universities and other young people settings across the country following a sudden unexpected death.

Richard’s early life saw him work in Shropshire retail and food businesses before going to university in London to read Economics and Politics. Richard taught for ten years in London comprehensive schools where he held middle and senior leadership posts before moving into higher education.

Richard has kindly provided two very helpful handouts, which you can download: